Create an Account - Increase your productivity, customize your experience, and engage in information you care about.

Ike is a dual-purpose patrol and narcotics dog, trained in tracking, handler protection, building searches and searching for evidence. Ike was purchased by the County in 2012 after another German Shepherd, Grischa, retired in 2012. Deputy Charlie Worm served as Grischa's handler from 2004 to 2012.

The purpose of the Green County Sheriff's Office Volunteer Associate Chaplain is:

To provide spiritual guidance and counseling to all members of the Sheriff's Office, both sworn and civilian as well as their families in time of need. The services of the Associate Chaplain are to be available on the basis of need and desire and is not intended to replace an individual clergy.

To be an aid to area law enforcement, inmates, and citizens of Green County by providing spiritual guidance, counseling and comfort in times of crises and such help as the Associate Chaplains are equipped to provide on an emergency basis. This includes appropriate referrals to the proper agencies to help those in need.

Such services are to be provided primarily by request through members of the Sheriff's Office or on request of other area emergency providers. Lieutenant Curt Quinn serves as the law enforcement coordinator.

An Honor Guard or Ceremonial Guard is a ceremonial escort composed of officers who are screened for their ability and dedication. Only those persons who are highly motivated and maintain exceptionally high standards of appearance and conduct and show aptitude for ceremonial duty are considered. The primary purpose of an Honor Guard is to provide funeral honors for fallen comrades.

Honor Guards may also serve as the "guardians of the colors." They present the colors for various ceremonies and official county, state, and national functions, which may include governmental funerals.

Additionally, Honor Guards serve as ambassadors to the public, presenting a positive image of their service.

The ceremony took place in the State Capital in Madison, WI.

This year 35 million school children around the world (26 million in the U.S.) will benefit from Drug Abuse Resistance Education (DARE), the highly acclaimed program that gives kids the skills they need to avoid involvement in drugs, gangs, or violence. DARE was founded in 1983 and has proven so successful that it is now being implemented in nearly 75% of our nation's school districts and in more than 53 countries around the world.

DARE is a police officer-led series of classroom lessons that teach children from kindergarten through 12th grade how to resist peer pressure and live productive drug-and- violence-free lives. The program, which was developed jointly by the Los Angeles Police Department and the Los Angeles Unified School District, initially focused on elementary school children. It has now been expanded to include middle school and high school programs.

The Sheriff's Office has provided a certified DARE officer to area county schools since 1990 when the program was first presented in the Monroe Schools. The county DARE program focuses on the 5th grade level and involves 9 weeks of instruction during a school semester. Currently, deputies provide classroom instruction to 5th graders in Juda, Albany, Monticello and Brodhead school systems and for the past several years, New Glarus and Monroe police departments provide officers in their respective jurisdictions. 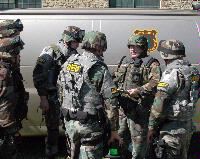 The SRT, known in some areas as a SWAT team, responds to high-risk, emergency situations which pose a threat to the community.

Using special weapons, tactics, and negotiators, the SRT mission is to resolve these situations without injury or death to responders, hostages, suspects or innocent citizens.

The Sheriff's Office is one of several agencies that make up the SLANT. Participating law enforcement agencies include: